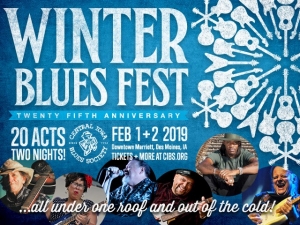 The Central Iowa Blues Society is pleased to announce the line-up for the 25th Anniversary Winter Blues Fest at the Downtown Des Moines Marriott, 700 Grand Ave on Friday and Saturday, February 1 and 2, 2019.

TWENTY blues acts in two nights – all under one roof and out of the cold!

The Central Iowa Blues Society partnered with Confluence Brewing Company to brew a special beer to commemorate the 25th Anniversary of the Winter Blues Fest. Winter Blues Helles Lager will be available at the fest as well as the brewery and participating retail outlets.

Advance Tickets $45 Weekend Pass – or – $20/Friday and $30/Saturday. At the door admission goes up $5/night. Tickets and more information at www.cibs.org.