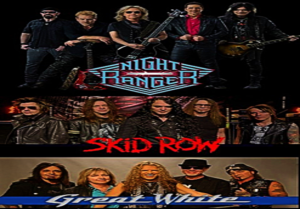 The Boone River Valley Festival is excited to announce the HEADLINER—the latest of THREE platinum- selling bands ROCKING the stage at Seven Oaks Saturday night on May 29, 2021!

While their popularity is fueled by a string of recognizable hit singles and legendary albums such as “Sister Christian”, “Don’t Tell Me You Love Me”, “When You Close Your Eyes”, the anthemic “(You Can Still) Rock In America”, along with “Sentimental Street”, “Goodbye”, “Sing Me Away”, and “Four in the Morning”, NIGHT RANGER has both epitomized and transcended a sound that goes well beyond the arena rock era! With 17 Million albums sold worldwide, over 3500 live performances, and a radio audience that exceeds 1 Billion, Night Ranger continues to expand their ever-growing fan-base- proving that powerful songs, plus accomplished musicians is the perfect formula for timeless success. Recently celebrating the 35th Anniversary of their first two albums, Dawn Patrol & Midnight Madness, they’re continuing to write and produce new rock material, including their latest single “Truth” (2018) and most recent album “Don’t Let Up” (2017).

We have two ROCK GODS sharing the stage, including-first up, SKID ROW! Famous for their rock and roll attitude that dominated the world in the late ‘80s and early ‘90s, Skid Row has achieved gold and multi-platinum record sales AND a Billboard No. 1 album chart topper. Now, the band is back on the road for their rebellious tour, United World Rebellion featuring songs like “Youth Gone Wild,” “I Remember You,” “18 and Life,” and “Monkey Business.”

Plus the amazing GREAT WHITE! Changes? Yeah, they’ve had ‘em. Fallen off the path? Guilty. Slowed down? No way. Never. Don’t ever count these guys out of the game. The band is READY to ROCK full-steam ahead into 2020 with an honoring nod to the past. Include the Grammy nominated Best Hard Rock Performance hit, “Once Bitten, Twice Shy,” plus “Rock Me,” “Mista Bone,” “Save Your Love,” “House of Broken Love,” and “Lady Red Light”, Great White has sold over 10 million albums worldwide, has six Top 100 Billboard hits, nine Top 200 Billboard albums, two platinum albums, and clocked the top of MTV four times. The latest and 12th studio album, Elation, garnered high accolades including on the emotional, Top 10 classic rock radio entry, “Hard To Say Goodbye.”We’re almost out of LIMITED early bird tickets for these THREE MULTI PLATINUM- SELLING BANDS!